As your M2M venture ramps up and matures, devices in your configuration will cycle through the three states of Active, Suspended, and Deactive for the following reasons:

A device’s status changes as the result of a service provisioning action. The diagram below shows the actions that transition a device from state to state: 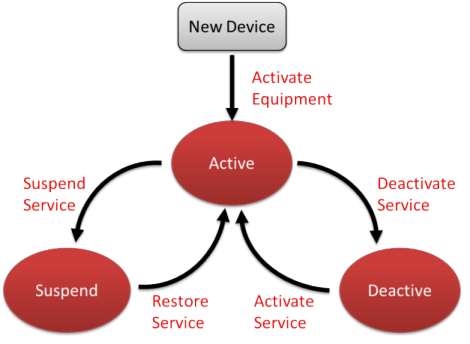 For a list of rules and constraints on provisioning actions, see Service Provisioning Rules.

A device’s status affects its ability to connect to the network, as well as the identifiers and attributes assigned to the device. Below are explanations of each device state in the Verizon Wireless B2B Network and the Verizon M2M Platform, followed by a table that summarizes the device states.

A device with an ACTIVE status:

A device is in the PENDING ACTIVATION state during the time between when the ChangeDeviceState-Activate request was sent and when the activation is completed and acknowledged by the Verizon Wireless Network. A device should only be in this state for a short time – perhaps a few minutes – but activation can take up to 24 hours if the network is extremely busy.

A device with a SUSPEND status:

A device with a DEACTIVE status:

The PRE-ACTIVE state is used on the ThingSpace Platform only, and does not have a corresponding state on the Verizon Wireless B2B network. The Connectivity Management POST /devices/actions/add request adds devices to account in the PRE-ACTIVE state but does not activate service for them. The only valid next-state is ACTIVE.